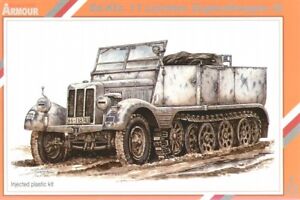 So another German half track rolls off my painting (dining) table. This time from Special Armour, which is a company I have never built before. It’s a nice little half track mainly used for towing guns I think. Another eBay purchase that I found quite cheaply. The kit was quite a challenge with various small PE parts that raised my frustration levels a fair bit. I lost at least one door handle in the process. The worst thing though was the front engine and drivers compartment did not fit properly on to the chassis. So the front section was too high and there was a gap between the chassis and the engine, and the front suspension looks a bit high. I am not sure if it was my building that went wrong but I could not see how it was meant to be any different as the whole back section was correct and in line. Anyway I wont be buying one of these again. Luckily you cannot really see the problem.

I used the usual dunkelb dark yellow and did a fair amount of chipping with my sponge and added plenty of dirt and dust. The squad in the back and the driver and officer are all from AB figures. I tried out a new M44 camo scheme using an awesome set of paints I bought. Also threw in an old fuel barrel that I rusted up.