I picked up a couple of British Dingo Armoured cars from ACE Models via a good model web site in the Ukraine http://www.hobby.dn.ua

Only around USD 6 per kit i thought these were pretty good value, and choice for the Dingo Armoured car is pretty limited. Its a great web site if you want to buy any particular ACE or Unimodel Kit considering i think they are all made in the Ukraine. Worth checking for a bargain.

Once i got the box open though my bargain didn’t look so flash. It took a lot of cleaning up of extra plastic on many of the parts. Also some of the moulding on the surface of the upper hull was pock marked and not formed smoothly.

The parts did not fit together very well and there were gaps showing everywhere. Maybe my lack of skill but it was certainly frustrating to build. The kit also includes some tiny etched drivers pedals and other stuff way too fiddly for me, which end up invisible in the interior once you have finished. So a pointless waste of effort anyway.

I made the best job of a poor and annoying kit that i could. I had to add buckets of stowage on the car to cover up all my botched construction and crappy moulds. 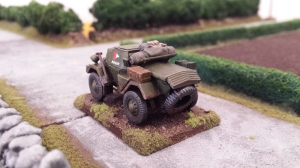 I did buy some very cool Dingo crew men from AB Figures, so my second attempt at this will include them. Overall i think i would probably go and buy the S-Model kit of the Dingo rather than this one if i had my time over again. 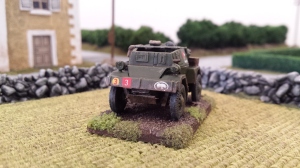